The FOMC provided fireworks in September, clearly the biggest event of the month which caught participants off guard. Before we jump to that we wanted to discuss the most common valuation method for capital assets, the P/E ratio, and it’s value as of today.

This P/E Chart is from the S&P 500 and is based on Operating Earnings (takes one time items earnings numbers out.)  Our original thinking was to show you how we compare today to the past, and how frothy we are today…wrong… from this info. With a 24 year chart (thanks Donald) visually, we are not that overvalued. We would argue that this time period was unusual and we are still frothy compared to a more normal period of time.  Looking to the second chart, from Multpl.com which goes back to the 1800’s it gives a more normalized ratio. There is absolutely no possibility that the historical data is as accurate as our most recent. But it shows a more normal ratio over longer time periods.

Bottom Line: As you can see the market can get more expensive and continue to rise. If history repeats itself, the downside happens much faster then the up. 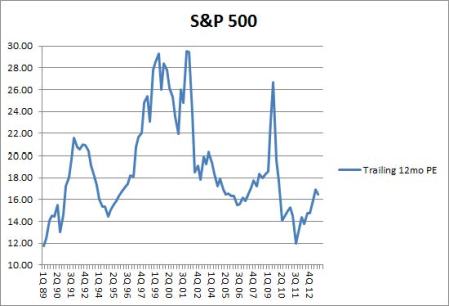 We are still puzzled on the reasons, but no matter, Big Ben and the FOMC crew turned on a dime and decided not to reduce the QE stimulus (bond purchases to keep rates lower) even after repeatedly saying they were. When the book is written we will know what occurred, our suspicion is there is more than meets the eye.

Our problem is expectation and credibility. The capital markets were clearly ready for the much-needed reduced stimuli but U-turning, participants were caught off guard and had to quickly adjust portfolios, fabricating certain positive movements. The FED had almost guaranteed they would reduce the stimuli numerous times, leading most including ourselves to an expectation of much-needed reduction. 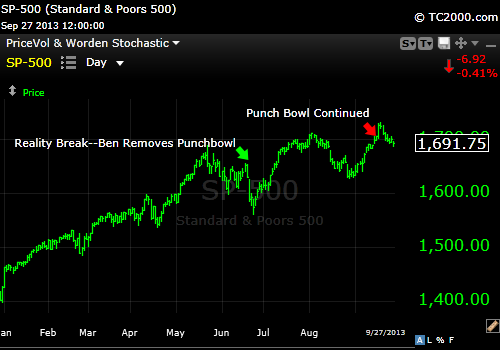 Three days before the FOMC U-turn move on taper, word hit the street that Larry Summers had declined the job as president of the FOMC.  While no one knows how close he was to being  nominated, it is a well-known fact that Larry Summers supports our view of less taper sooner (hawkish.) Janet Yellen is thought to be more dovish (supports extended stimulus.)  During the Greenspan era it was hard to recall a dissenting vote. Bernanke has openly allowed dissenting votes. It could be possible the next chair may actually lose a majority vote at some point during his/her tenure….We are the only ones that we know of that would ever even say this at this time….time will tell ! 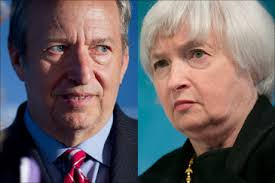 A very proud moment in September was our neat article on inheritance planning. The article ran on a Financial Times Service and was also picked up by the Wall Street Journal. While this article is not directed at clients, more for advisors (making it even more flattering) we have dissect the details in an earlier post as we have enormous experience in the matter and this is a huge item to occur over the next several decades. 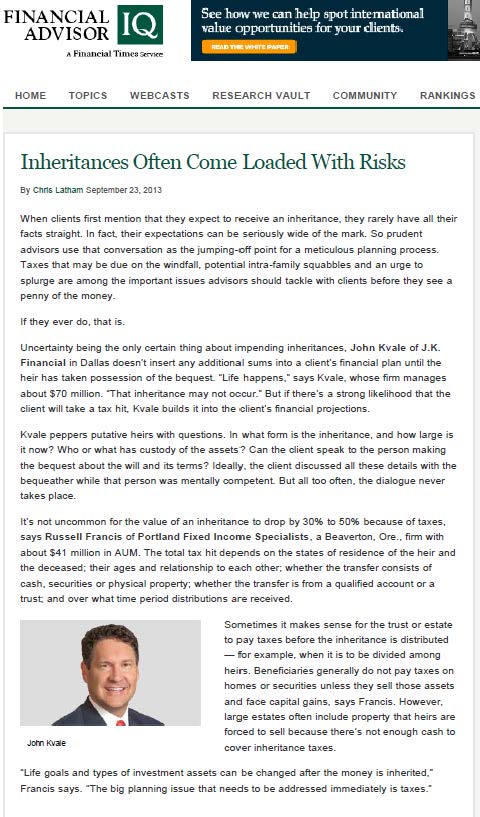 Don’t forget the spooky month we are in, however often times the fireworks begins in this quarter and push through the end of the year.

Have a Great Friday!