Our First Accidental Post in almost 2000, the Perils of Bad Wifi Connections – All Eyes on the FOMC next week – Friday

On Wednesday at 9:23 AM, just over an hour before the regularly scheduled 10:30 am post was to go — a quick review of the 10:30 post led to an update from the Ipad which had saved data on the device and then updated it when the review occurred… and some how sent the following title … 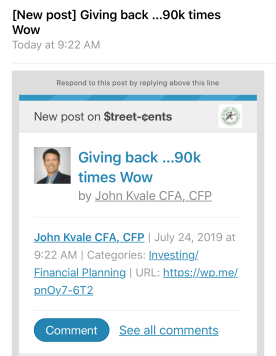 If you saw it and wondered… now you know – for the record first time in almost 2000 posts now! Of course some have gone off at 10:30 pm rather than am and earlier than planned – but this was the first totally unplanned post – sorry for the confusion, if it caused any! I like to think of it as authenticity 😀

It’s hard to feel like they must lower rates as the global economy is slowing but not falling off a cliff …. Their (FOMC) public rhetoric has led Market Participants to be almost certain they are going to lower. If they don’t lower rates – disappointment!

Have a GREAT Friday and a Super Weekend – talk to you next week!