Over the last two weeks during the Mauldin SIC conference (which we are still digesting), multiple speakers mentioned the Jolts Index -Job Openings Labor Turnover – A Bureau of Labor Statistic (BLS) that measures job openings.

Back in August of 2020, here we first took note of the movement in the Index as it made a turn at the bottom of this chart and actually surprised to the upside.

Fast forward to today and noting what the Mauldin speakers featured, this Index is at an ALL TIME high!

Have a Great “JOLTS Update” Day!

Get Ready for Some Possibly Very Positive Macro Economic Reports …. The Year Over Year Comparison

Fast forward to today and we are almost exactly one year to the day when direct Economic Effects began ….

Get Ready For Some Crazy Macro Reports

Many, but not all Economic reports are Year over Year comparisons…

Imagine as we compare reports to an almost shut down economy, especially just in the very near term… to a much more robust, but of course not at full capacity Economy?

Here is the GDP from Fred (Federal Reserve St. Louis) – A rather slower moving Economic Measurement

Over the next few quarters many Economic numbers may have some really jaw dropping changes… just be aware it is likely better to use month over month comparisons if possible for a better measure.

We bet we will all see some pretty interesting Headline Reported numbers though!

Well covered in Part 1, here, the FOMC (Federal Open Market Committee) and Capital Markets also believe currently that interest rates will stay low for longer …. maybe we are hopeful they are both wrong (No maybe, we are!) but there is one word that we know the FOMC cannot allow to get out of control …

With inflation running persistently below this longer-run goal, the Committee will aim to achieve inflation moderately above 2 percent for some time so that inflation averages 2 percent over time and longer-term inflation expectations remain well anchored at 2 percent.

Triple the Bazooka – Who Let the Money Out!

During the 07-09 Great Financial Crisis, the FOMC then lead by Ben Bernanke, used the Feds balance sheet to purchase assets in order to lower rates, increase asset prices and calm markets….

This was unprecedented at the time….. Not today!

The current Bazooka is three times more ALREADY and will most certainly continue to grow in size and stimulus !

What if eventually the economy takes hold, and springs back to life –

Here is the traditional measure of inflation, Consumer Price Index from the BLS (Bureau of Labor Statistics) – again we like the afore mentioned Trimmed Mean and so does the FOMC!

Not to worry, we will be watching that 2ish % level closely…..

Inflation may occur, forcing the Feds hand at higher rates — time will tell!

Have a Great “FOMC and Interest Rates Part 2 Conclusion” Day!

Two Nice Data Points Last Week You May have Missed…. Housing and Employment … An In-House Perspective Too

In case you were busy last Holiday Shortened week (Hope you had a Happy Fourth of July) and missed a couple of important data points …. here they are

First Mentioned here, back in March, last week (7-1-20) another very strong reading of the MBA Purchase index, which is an index that tracks purchases of homes, (Excludes Refinances) and gives a good future expectation view of home movement, value and transaction…

On a personal, in-house perspective, with an unusually high 20 and counting residential home movements SO FAR this year, we are seeing a liquid, fair and fast paced market!

Then, the BLS (Bureau of Labor Statics) released their update on the unemployment rates…

Yes it is still high, but the drop caught many by surprise and was a much greater drop than expected!

A pretty Good Good economic release week…again, that may have slipped by you!

What Happens When You Get A Decidedly Positive Economic Reading, While Expecting Negative?

Closely followed as a broad measure of the health of the economy and the consumer, experts (so called) from all ports of finance (Economist, bankers, investment bankers, brokers) tally their estimates of what the monthly reading will be.

In all fairness, due to bread crumbs from other reports, usually the forecasts are very close and often garner a quick glance and a carry on to other items attention span.

Fridays expectations were for a loss of just over 7 million folks.

Oops – What Happens When You Miss Big?

With an expectation of ( -7 million) more job losses and announcement of +2.5 million gains, caught Market Participants WAY off guard…

Interest Rates took note as well… which is very logical, as rates go up as economic conditions expand…

Likely ahead of ourselves a bit, but heck it is a start….

Bumps most certainly still ahead… but still a start…

Have a Great “Why We Don’t Forecast Much” Day!

Great Economic News – Why Some are Frowning?

On Friday, the Bureau Of Labor Statistics (BLS) released their regularly monthly employment report – this is the first report in some time where ….

Here is why some believe this!

In addition to the above Unemployment level, average hourly earnings were also released and they were up 3.1% year over year — breathing a much needed pay increase to many ….

The bad news for many is that they believe these good numbers will give the Federal Open Market Committee (FOMC) ammunition for continued rate increases.

Currently FOMC members are on record saying they will raise rates in December and three more times next year (2019).

The worry is an eventual inverted yield curve – which we have mentioned many times is a very good precursor to a recession!

By looking at this chart, we are far from an inverted yield curve at this time- leading us to believe this “Good News = Bad News” may be very unwarranted…

Now you know the rest of the story !

Have a Great “Good News is GOOD News” Day!

Consumers are the ultimate driver of an Economy, especially the US economy. By most estimates, the consumer and his/her spending makes up over 66% of the US GDP (Gross Domestic Production) a broad measure of economic health.

Here is an interesting analysis of the Bureau Of Labor Statistics (BLS) most recent monthly Employment Report … mentioned on our “Break In”  of our Friday post.

The highest, most blunt view of employment is the Unemployment rate, usually figured in % total unemployed.

At 4.4%, the unemployment rate has fallen to a rate many, including ourselves thought maybe possible via post great recession!

The little Economy Engine that could!

Take this job and shove it

Confident enough to walk away from the job? Sure looks like it.

Said another way, individuals have enough confidence in finding a new job, they are not afraid to walk from their current one. 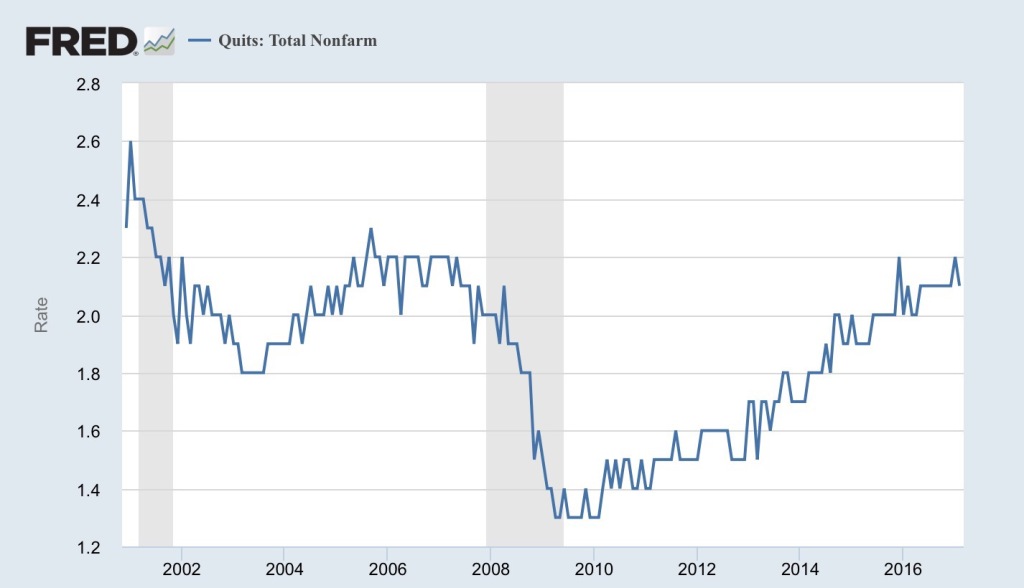 Brought to the attention of many by our current Federal Reserve Chairwoman, Janet Yellen, the job opening report also known as JOLTS report is showing clear evidence of job opportunities.

This chart helps explain why workers are not afraid to walk from their current job as well (prior chart.)

Certainly the Great Recession has had lingering effects. Focusing on the move upward since 2009, one can see the line heading in the correct direction, possibly giving confidence to those above who are leaving their current job.

Going back to our original statement, with so much tailwind for the consumer coming from the employment of the US Economy, it would not be a stretch to think higher spending is in the cards, and a better GDP!

In a recent credit.com article that we were asked to write, during the research phase for the article, we stumbled on to some interesting facts from Bureau of Labor Statistics Consumer Spending Survey.

This from the article ….

What is not showing in the BLS graph is the breakdown of at home and away from home food. According to the same 2014 BLS report a whopping 41% of our TOTAL food costs are away from the home. This is a stunning number. Eating out is fun but rarely as healthy or as cost effective a way to spend your monthly income. Staying at home, planning in advance, eating healthy, and spending time with family or friends may be a great way to lower that bulging food budget.

We are including the full article in our Newsletter, which is in the works. My family hates this discovery  … the belts have been tightened .. financially and physically (for not eating out.) It’s not easy !

How much do you and your family eat out ? Might be more than you think !

Which one are you?

Neat abbreviated stuff from the coming Q 3 Newsletter, which is in the works !

Tomorrow, Friday Dec 5, 2014, one of the most popular monthly economic reports occurs.  While many may focus on the headline employment number, expected around mid 200k, the most important part of the report will highly likely go unnoticed, UNLESS it surprises, especially to the upside.

Consumers drive our economy and the majority of consumers have had little wage growth in years.

This from the October 2014, Bureau of Labor Statistics (BLS)

IF this part of the report is higher, as was in August…look for higher rates .. sooner, and good news for the Economy!

Have a great day!