About one week ago, both kiddos asked me if I knew that TikTok was scheduled to be banned in the United State – Much to their surprise, I did …. What I did not know, was exactly what TikTok did at the time….

Thankfully with a little help from the kids, I now understand what this social media app does…. not really sure of the popularity … but ok

Had no idea, just how big this app was….

With multiple recent office conversations on the subject, timely chart!

Thanks once again to our friends at Visual Capitalist, here is an excellent chart of the platforms…

Just got familiar with Instagram, kids gone… all about snapshat and the afore mentioned TikTok …

Talk Facebook to a teenager and they will look at you like you have three eyes…. not kidding!

Good Luck Fellow Parent App Chasers….may the force be with you in finding the next hot app they gravitate to!

It seems like only yesterday, unknowingly, a seven year walk began. Eight minutes each way …

A walk to school!

First just one kindergartener, then two years of both until the oldest went away to fifth grade, then back to one walking partner for these last two years. Some great conversations, life questions, lost footballs (street drain capture), friendship questions, satellite umbrella’s due to strong winds, cold runs after underestimating the temperature, and even a complete body splash face plant from a miss-step on a wet curb, requiring a return home for re-clothing ….

A new school shoves our soon to be fourth grader out of the “old” school and into a new one, too far for walking … it sure went fast.

Due to the new school, or rather the tearing down of the old school, our soon to be fourth grader celebrates his last day of school today, much to the dismay of our soon to be seventh grader who has another full week….YIKES!

For us…. What could be better?  Not one but TWO last days of school! Party !

Thanks to those who have already checked in to our new Facebook page. Well done, Donald the brain for updating it.

If you have not seen it yet,  be sure to give us a “like”  https://www.facebook.com/jkfinancialinc/

Confession time….so Facebook has not been on the radar, however, after the great welcoming  even before an announcement…. expect more action there… let the learning begin!

The Facebook page is part of our new website…. which is not ready for release YET…. but is getting close !

Ahhhh…today is a Friday and with one celebrating the last day of school and one studying for a few last exams … Guess who will be more fun to be with? .. haha-

Enjoy your weekend! It goes fast, make the most of it.

With the constant Facebook/Social media discussions as of late, we ran across this earlier this week and thought it interesting for a light, non-market, mid-week view. Astonishing stats !

I had never even heard of Orkut (#2 daily visits), bet our kids have!

Have A Great Day!

Comments Off on A Social Media Primer, Orkut ?

When things are too good to be true; Facebook

Posted on May 29, 2012 by John Kvale CFA, CFP | Comments Off on When things are too good to be true; Facebook

A memory of a coach telling us as players, “If you dance in the end zone, you better be able to back it up” comes to mind with Facebook, especially given the events that have occurred over the last few business days.

While many of the stories we have seen come from a slant of “The game is rigged!” our thoughts again focus on a price or capitalization that was assumed when the Facebook IPO occurred.

Yes there were issues, GM pulled their advertising, the NASDAQ had opening problems, Morgan and Goldman (lead underwriters) have had mishaps before. While all of these items are true, in the end it appears price does matter even for an alleged very hot issue.

While there are certainly sharks swimming in the Wall Street ocean, the valuations and growth rates used to establish the price of Facebook may have been aggressive, making us feel like, for now, Wall Street is a more realistic place.

Here is a chart of the action since Facebook started trading through mid-day today. 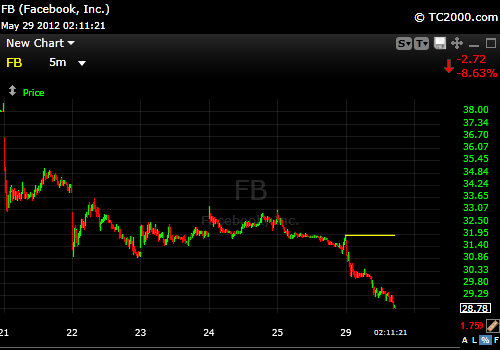 We are not recommending any investment (long or short) in Facebook and do not own or have any shares short at this time.

Comments Off on When things are too good to be true; Facebook

Posted on May 21, 2012 by John Kvale CFA, CFP | Comments Off on Facebook Proves Price Does Matter

On Friday the much awaited Facebook IPO began trading. With a storm of issues surrounded this initial offering, it appears that fundamentals overwhelmed hype, which is not always the case. I happened to be with a group of multiple professional investors on Friday, and while we all thought the price was rich, no one called the disappointing (to Wall Street) price action that has ensued.

The Facebook IPO was scheduled for a later am morning issuance so the employees and managers of the company could have a convenient 9 am pacific time viewing. While the NASDAQ made concessions and moved the original open to the west coast, they may have wished they had stayed in New York. After almost 30 minutes of unscheduled delays, trading began as orders were rushed, dumped, and what only a legal battle will soon determine, left few knowing who actually owned shares by the end of the day.

Not withstanding the bad opening and the glitches in the systems, it appears a richly valued company with extreme expectations has done the unthinkable “Broke the Offering price” in less than one day of its trading.

Here is a chart through mid morning trading: 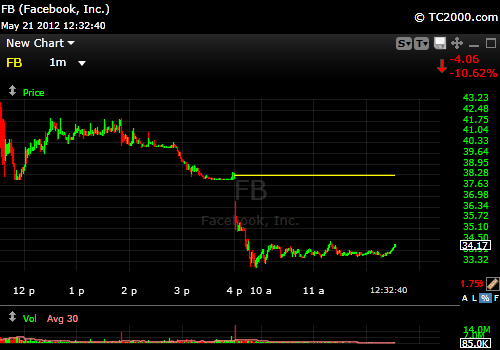 Time will tell how this turns out, but given the questions we have heard from many, we thought it worth mentioning this Monday morning!

Posted on January 31, 2012 by John Kvale CFA, CFP | Comments Off on Facebook and Sipping from the Earnings Fire Hydrant

It appears the long-awaited Facebook IPO is nearing the Wall Street docks, with Morgan Stanley and Goldman Sachs (surprised Goldie is not lead, with their large earlier investment) being the underwriters.

Yesterday I saw or heard at least six different opinions on the Facebook IPO most of which were positive. At this time, given the lack of information that has been officially released, it is impossible to formulate an accurate opinion. It is difficult to pick the team that will win the big game, especially not having any idea who are the players. Our position is casual observers during this process, however we are always interested.

Today we have 29 companies from the S&P 500 reporting which is similar to taking a sip of water from a fire hydrant.  Most earnings have been ok, but not terrific, again setting the bar relatively low, in our opinion.

Donald is in town tomorrow for a group of expert forecasts for economic and capital market related events sponsored by the local CFA association. We will bring you the cliff note edition of facts, should they prove interesting.

Back to work as conference calls beckon.

Have a Super Day !

Comments Off on Facebook and Sipping from the Earnings Fire Hydrant

5 Biggest Zigg Positives of the Year 2011

As a special positive Zigg while others are Zagging, Friday, the last business day of the year, we wanted to Zigg our top 5 for the year.

We hope you enjoy our Ziggs and have a safe and Happy New Years:

On May 1, 2011 American troops storm Osama Bin Laden’s hiding post, which leads to our first and often forgotten consequential positive. After a decade of hiding, Bin Laden is finally caught. Later in the year, on Sept 11, 2011, exactly 10 years to the day, the 911 Memorial Ground Breaking takes place in New York, solidifying our first Zigg positive for the year 2011.

March 11, 2011 marked the first official notification of Japan’s Earthquake. Remembering the early am terribly inaccurate reports of approximately 10 deaths, and a bit of minor destruction, which we now all know was much greater destruction by mother nature, and the eventual fighting of nuclear fallout. Our second positive goes to our Asian trading partners for the ability to rebound, rebuild, and repair.

A Collage of Societal Positives: Facebook pushes towards 1 Billion users and communication across nations and the world expands with the internet’s indifference to geography, religion, language, government, or time; Drunk Driving Falls to lowest level in 17 years; Violent Crimes fall to lowest level in 40 years, and teen pregnancy falls to lowest rate in 70 years, all making for excellent positives in our own Zigging way.

Our last Zigg, goes out to the general positives of the Globe. Yes, there are conflicts, but for the most part we are all getting along. Of course we could all be growing faster and more prosperous, but for the most part, as a world, we are better off today, than we were one year ago.  Again, with some exceptions, we all have access to better health solutions than a year earlier, capping a year of terrific Ziggs.

We thank you all for Zigging with us, commenting, sharing with your friends and family, and appreciate your time.

Have a Great Day and a spectacular New Year’s, be safe, we will see you on the other side!

Comments Off on 5 Biggest Zigg Positives of the Year 2011

Posted in A Look Back and The Week Ahead, Market Comments, World Political