Chair Yellen … Please Continue, the Economy can handle it, and may need it!

Tomorrow and Wednesday mark another FOMC meeting.  It is expected they will reduce asset purchases by another $10 billion per month to a new $35 billion monthly level ($85 billion monthly near the start of 2014.)  We look forward to Chair Janet Yellen’s public testimony on hump day for clarification and guidance

If it has not happened by now it will not

Quantitative Easing aka QE or the purchase of fixed instruments by the FED to lower rates was a clever and handy tool when first used, but has overstayed its welcome. Rates have been low enough for long enough, we think it’s done all it can do!

The side effect of such purchases are a ballooning balance sheet (the FED creates money synthetically to buy the assets … not to worry there is a debit and credit entry for those accountant likes).

Here is a chart from our friends at JPMorgan of the afore mentioned balance sheet that also finds its way into our upcoming newsletter (that’s Trillions $$$) … getting pretty big! 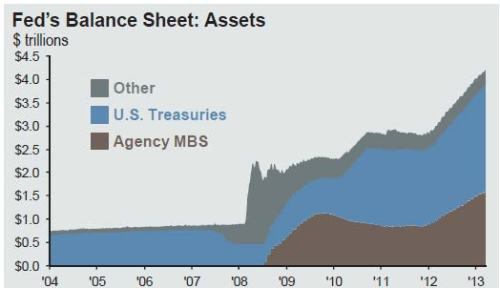 The FED has a problem

In our coming newsletter we have an article concerning the FED’s ability to raise rates with so much extra money sloshing around in the system, which is a direct byproduct of the QE.

Janet … Go ahead and continue to slow those asset purchases (or even go more than $10 billion reduction) please! The US economy can handle it.

In a so-called seasonally light week of events, earnings, and Economic numbers, we decided to also go light with our charts of fun, here and here. Bernanke turned a light week into a very important one.

On Wednesday the FOMC lead by Ben Bernanke as outgoing chair (Janet Yellen takes over at the end of January 2014) found enough evidence in the Economic tea leaves to slow the stimulus currently in the form of $85 Billion in monthly fixed purchases, artificially lowering interest rates (lowering from $85 Billion to $75 Billion monthly.)

Markets cheered more than we expected and interest rates have behaved post Bernanke taper. We have been wanting this to begin since summer and were very unhappy when the FOMC passed just before the government shut down. Maybe the relief we felt was also shared by other market participants and they responded by bidding markets higher. Time will tell!

TODAY IS FRIDAY and that means the end of another terrific week and the beginning of a Holiday Shortened two weeks. Next week the office will be closed on Christmas through the weekend. The following week is also a partial week with New Year’s landing in the middle. Suffice it to say money will be moving MUCH slower as skeletal crews will be manning all stations.

We will remain lightly tethered and ask if you have an emergency you email us!

Remember to spend time with those special in your life …. it seems only minutes ago we were welcoming all to 2013!

Fed Mandates and Economic Cause and Effects

The last few posts have been light on deep technical stuff, given the weather, holiday party, and time of year. Well we just couldn’t handle it any more, as such, here is a little deeper look at some of the Economic releases lately that have put a bid in the capital markets, as mentioned last week “Markets get Jiggy.”

One of the top most watched reports as of late is the payroll report. In part due to the fact that the FOMC has stated they are closely watching, and with a FED mandate of  “Maximum employment” look not further than the Nonfarm Payrolls Report.

Two hundred thousand new jobs monthly has been noted as the line in the economic sands that put just enough wind in the sails to allow the FOMC to begin letting off the QE (Quantitative Easing) pedal. Several consecutive months of  a strong jobs gain should give the FOMC enough confidence the economy is moving fast enough to go it on its own.

6.5% is the key number drawn in the sand, this time by the FOMC themselves. Ben Bernanke, desiring a more transparent FOMC during his tenure, literally has directed investor attention to a 6.5% threshold in this rate for his easing of help via QE.

This number however has a second component that can cause it to be skewed, the participation rate. The participation rate are those who are attempting to find a job. If the participation rate falls (less are looking) which it has over the last year, the unemployment rate can/may look artificially lower than reality. Not to worry, the FOMC also knows this and as such have given signals they may include other factors.   Participation skewed or not, it is certainly very nice to see this trending down from the double-digit rates we saw during the 07-09 recession.

So What Does it all Mean?

IF these Economic numbers and a few others align, and stay on track, the FOMC would be able to slow the asset purchases (QE) that are artificially lowering interest rates, allowing rates to rise.

Apologies for the length of this post, we did not intend to get so long-winded, but again as mentioned last week, we wanted to follow-up on a couple of Economic reports that had garnered much attention.

Later today the end of one of the more important two-day FOMC meetings concludes. Talk of taper (slowing of FED purchases to lower rates)  which will directly affect rates and the equity markets becomes reality. The FOMC will let us know if and how much they plan on slowing the punchbowl/stimulus.

Larry Summers Takes Himself out of the FOMC Hunt

Unfortunately for the FOMC, the big news came over the weekend. Wow, did the twitter feed to my cell phone get worked over on Sunday as Larry Summers pulled his name from the FOMC via a letter to President Obama. This was a surprise to many and had much greater impact than we ever thought.

Surprisingly the equity markets are making a run and bonds are also cooperating even as the economics continue to just chug along. Market participants are thinking that since Larry Summers is out, Janet Yellen is in, and she is going to be less likely to withdraw stimulus or at least slower than Summer’s would have been.  Don’t get too carried away, as in our opinion the FOMC has made it clear what they are going to do. We think the punch bowl will be shrinking.

Within a few hours we will know, so buckle up, it may be a bumpy ride!

Have a great Wednesday!

Goodbye May 2013, we wanted to hit a few of the high points! The year is not slowing down so far, but with the official entrance into the summer doldrums we expect slower motion for a while.

Here is our May 2013 Capital Market and Economic summary video, by John Kvale

Interest Rates from high above on a longer term do not look to bad…actually it looks very good.  As a general rule, lower rates are helpful to valuations, interest costs along with margins and long-term confidence.

Yikes ! When we look at a shorter term chart, the story may be changing as rates have begun to rise somewhat faster than many may have expected. Rising rates act as a mild headwind unless they rise too fast. We will keep our eyes peeled on this matter.

If you are one that likes to debate…step right up. The debate is on, and it is anyone’s guess when the Fed will slow the gigantic $85 billion monthly purchases of fixed securities. For the record, the Fed has been mashing on the gas long enough now that they actually purchase more than $85 billion monthly, as prior purchased securities are maturing and have to be re-invested.

This debate is a major contributor to our prior subject, interest rates. IF and WHEN the Fed really let’s off the gas pedal, the fear is what rates will actually do….or more over, how fast and how far they will rise. Buckle up and let’s all hold on, if the Fed draws a line in the sand we may begin to see who has been swimming with no swim trunks…..not us of course!

The most surprising continued element happening this year is the huge rise in market valuations given the slow growth that is being recorded. Do not get us wrong…things are getting better in MANY aspects of the economy, but are they

REALLY getting THAT MUCH better?  We do not think so, given the data we have at this time. Current market growth was 3% over the last quarter…awesome that is great…but a 10% plus move in the US capital markets is a bit extreme…in our opinion.