Lunch with Kyle Bass…Forecasts – Oil, China, Interest Rates… We will review in the future!

At one of the favorite events of the year, Three Part Investor Ideas Conference where over 70 publicly traded companies present in rapid fire succession…. and about 300 professionals in the investment community, present party included, listened to Kyle Bass speak for an hour over lunch.

As we give thanks later this week, I will speak to this conference and a special memory from last years event to be thankful

Who is Kyle Bass

Famed hedge fund manager who correctly bet on the real estate bubble of 07-09. Resident and office in Dallas Texas. Talk about timing.. Kyle just happened to open his hedge fund in 2006… good start right out of the gate.

The best thing about Kyle is he is not afraid to speak his mind and tell folks what he thinks… Can you feel the forecasts coming?

We will code this post forecast and look back in a year of so and see how they did!

Here are the biggies:

Oil – Opec reaches a deal and oil rises and stays in the mid 50’s to low 60’s by early to mid 2017. As an add on, Bass was positive about the US and the ability for the US to pump oil domestically along with the positive economic influences that may seep into the domestic economy.

Rates – Kyle is thoroughly convinced rates across the board are WAY too low and will rise, possibly gradually or maybe faster over the next several years. Foreign negative interest rate bonds are in his cross hairs as unsustainably low and silly in his opinion. Domestic interest rates should be much higher according to Bass and will march that way, with numerous short term rate increases on the horizon, again according to Bass. The Taylor Rule, an economic ruler that mixes growth and rates to come to a normal interest rate level was mentioned by Bass; According to the rule rates should be MUCH higher.

China Financial System Problem — The China BANKING SYSTEM has problems, but China does not explode…. just for entertainment purposes we clipped a google search showing a much different picture of Kyle’s thoughts… careful what you read….. 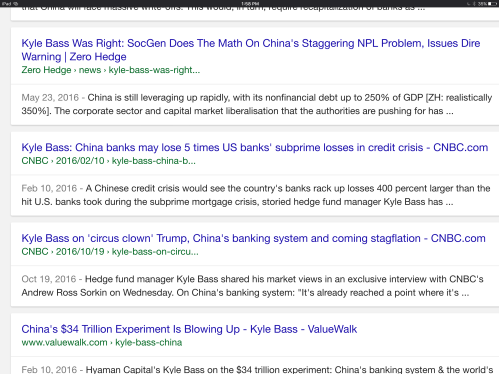 So Bass, thinks the currency will devaluated by at least 20% over the next several years and  strongly thinks at least 10% over the coming year… ahhh a super easy to follow forecast…

Again, a far cry from the end of the world headlines you see from our google search…

Thanks Kyle…we will check back at a later time to see how these forecast went!

One response to “Lunch with Kyle Bass…Forecasts – Oil, China, Interest Rates… We will review in the future!”