Welcome to our monthly Economic, Capital Market, and Financial Planning tip of the month.

This months Financial Planning Tip of the month may save you tax dollars before year end !

For those new to our writings, we touch on the most pertinent Financial “stuff” along with a video of my mug that has even more specialized details of the latest month as well as this post.

The 401k, 403b or other company sponsored retirement plans are a terrific and almost mandatory vehicle for a successful retirement. Money contributed is before tax in most cases, deducting the portion saved from your income for the year of contribution. Be sure to utilize that maximum.

Now is a good time to make sure you are going to max your plan – use it or lose it — tax savings that is.

Give us a call if you have any confusion/questions!

Near the middle of the month, the Federal Open Market Committee (FOMC) led by Janet Yellen chose not to raise short term rates.

This was the biggest story by far of the month.

During the press conference after the meeting, Janet Yellen painted a gloomy picture worldwide as a reason not to raise rates.

What did markets do after Janet painted a gloomy picture ? They got gloomy too ! 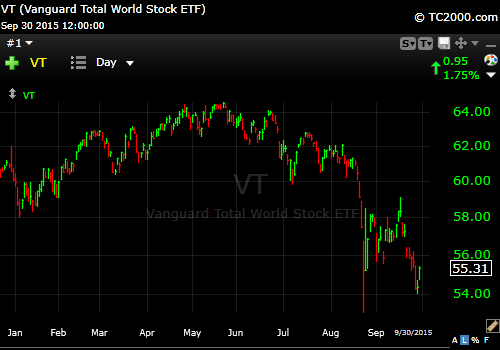 No way to tell if this was cause and affect or just coincidence — but it did happen. (Again, we have felt markets were FROTHY for some time !)

Oddly, shortly after the meeting, other FOMC officials came out saying they will raise rates — crawfishing back from their prior statements — losing some credibility!

Hopefully they will raise soon!