With the first Presidential Debate a few Mondays away we thought it timely to remind everyone on BOTH sides of the fence, long term, Capital Markets are only concerned with earnings and growth.

It’s never as good as we think, or as bad…just somewhere in between !

Have a Great “Reminder of the Real Facts” Day !

As the conventions wrap up, the parties have “officially” nominated their person. The coming debates are expected to draw more eyes than ever before.

Here are the latest pollster odds …

We are heavy into earnings season and the results are trending better than analysts were predicting. Next week we have a busy, but informative chart that shows how regularly earnings start high at the beginning of the year and drop as the year passes….

Ahh…but that is next week… Today is a Wonderful …over-the-mid-point of summer…last business day of July ….Summer Friday!

USA Election day is finally near, our thoughts on the possible market reactions

Posted on November 5, 2012 by John Kvale CFA, CFP | Comments Off on USA Election day is finally near, our thoughts on the possible market reactions

With election day on final count down, we wanted to give you our thoughts on possible market reactions given certain outcomes. No matter what poll you may choose to look at, it is not clear of outcome at this time, which makes for a good analysis of market reactions.

So here we go:

One last item worth mentioning, the fiscal cliff (tax increases looming near year-end) are much more worrisome than the outcome of the elections for us. Should we have option two above occur (party agnostic) this is very positive for the fiscal cliff concerns and makes us more optimistic for the nearer term.

PLEASE VOTE..IT IS YOUR RIGHT!

Have a great day!

PS Phones are up and working perfectly!

Comments Off on USA Election day is finally near, our thoughts on the possible market reactions

Politics and Money…ever wonder where it comes from or goes? You can tell here !

Posted on October 18, 2012 by John Kvale CFA, CFP | Comments Off on Politics and Money…ever wonder where it comes from or goes? You can tell here !

If you have been reading our writings long you know we are careful not to tread too far in either direction on politics as it is just a losing game. Recently we ran across and interesting site that you might want to review since it is the season.

The Federal Election Commission,  created in 1975 by congress has the following Mission and History:

…to administer and enforce the Federal Election Campaign Act (FECA) – the statute that governs the financing of federal elections. The duties of the FEC, which is an independent regulatory agency, are to disclose campaign finance information, to enforce the provisions of the law such as the limits and prohibitions on contributions, and to oversee the public funding of Presidential elections.

Speaking of snazzy…here is a snazzy election donation tracking money map to whet your appetite: 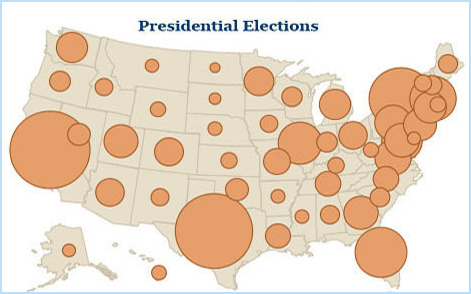 If you have a spare moment and a curious thought, take a look at the site, it will be worth your time.

Comments Off on Politics and Money…ever wonder where it comes from or goes? You can tell here !